Ladies and Gentlemen, I give you A Miracle In Spanish Harlem. Do be sure to catch this film; It’s like watching a poem. 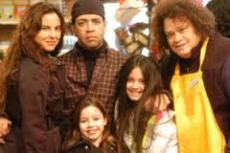 This is not an exclusively Hispanic story – it’s just a story that happens to people who just happen to be Latino. The story is timeless, crossing boundary and culture, its main language LOVE. And that is what translates. It is for this very reason that I could see MIRACLE being adapted for live performance, and being that all the world IS a stage, then you could take this piece anywhere, for anywhom.

Director Derek Partridge seems to have gifted his ensemble with a vision of his own; a pragmatic approach enabling some really real  performances. Five minutes in and already, I’ve identified with TITO. This is a guy whose eyes are as crucial as the script in telling us the story. As Luis Antonio Ramos draws us in with those peepers, so he lets us see his world through them.

This is a world whose genetic make-up began with an extract of Carlos Bermúdez, whose screenplay gave birth to a pretty awesome bunch of people. (I refuse to call them characters when they’re as real as this). It is this writer’s DNA that acts as a catalyst here, setting off a series of events that allow the production team and performers to deeply reach within themselves. And then, they decorate our screen from the inside, painting in wide, free brush-strokes with their own souls. Their palette? STORIES.

We see Tito’s Mom, (Priscilla Lopez) having a rant for his shamelessly blocking the love of God from his girls’ lives. And just how true is this performance? Well – for starters, Ms Lopez would appear to have studied my own (Irish Catholic) parents for inspiration. For the most part, she underplays – thus underpinning the very nature of a parent who thinks they know what’s best for their children. (And they’re usually right, damnit).

Back to those eyes. There’s stories behind them; we know this much already. As Tito’s single-parent status is established pretty early on, so it’s apparent there’s a lost love behind them. And we’re dying to find out more; we eventually do just that, through the heart of Mr Ramos, which he wears on Tito’s face. Ramos pours everything he has into the pressure-cooker of Tito, to be released in drip-feed motion as the vapour is released. The revelations of the depths of his soul are conveyed both with words, and without.

Gradually, we’re GRACED with EVA (Kate del Castillo) as she glides through the store, eventually meeting us face-to-face at the checkout. We immediately warm to her, so it’s unsurprising that Tito feels likewise. From the get-go, Eva’s established as a feisty lass, with just the right amount of charm and a healthy sprinkling of pluck – this is Miss America right here. She recognises a good ‘un, too, as she acclaims Ernie as “something-else” in exactly the right way. (Ernie – sensitively observed and displayed for our viewing pleasure by the super-talented Adrian Martinez – is a man whose presence tells us a lot about the others; this is great use of the sidekick narrative device).

Then there’s the kids -the gorgeous kids. Confidently performed by Fatima Ptacek and Brianna Gonzalez-Bonacci, Amanda and Samantha are two little girls hopeful for their Father’s future. They’re part of him, and they don’t let him forget it.

There’s a bit of ACTION, too, which I won’t spoil for you. The MAIN EVENT is something we as the audience aren’t privy to, but the resultant aftermath is displayed. Whether this was intentional or a result of budgetary constraints, it worked. If it was the latter, then Serendipity was at work.

It’s far from a perfect movie, but if truth be told, the minor flaws kind of added to its charm. I’d liked to have seen more realism –tighter direction might have been the key – when the girls met Daddy after the aforementioned occurrence. Apart from beautiful puppy-sad eyes, there wasn’t much difference between their reaction here and the more everyday scenes.

I could have done without the canine back-story and Eva’s au-pair revelation; we’d already endeared ourselves to her, so this felt like a sell-out. It kind of felt like an addendum, the white lie itself a deliberate flaw-of-sorts sellotaped on to Eva’s character. To have kept her as Miss 90210 would have only added weight to the love story – and would have actually been a nice Cinderella twist – she with the princely wealth and he, scrubbing the floors.

The Miracle itself was a bit of a MacGuffin – I’m talking the actual miracle here, not the miraculous finding yourself/finding love/finding happiness theme. I blame the REST of the movie for being so damned good that it sucked me in and made me want to forget the supernatural edge. It gave me PEOPLE to believe in, so I didn’t need a Power, a Glory, or a Holy Ghost. Is divine (or Tyronian) intervention the reason things turned out for our couple? I’m pretty sure that with the strength of our two lovers, supported by one heck of a loving family, things would’ve worked out anyway for sure.

So is it true what they say? That they don’t make them like that any more?

Pass The Tissues rating (out of 5):

I don’t know why I like it so much. It’s compelling stuff, granted. But to have your principal thisclose to sexually assaulting his wife, failing to help a dying girl, and engineering the lirio scenario? That’s a risky little game!

Beaut TV is in the square eyes of the remote beholder. But Gilligan’s Isla? It’s bigger than that. It’s unsurpassed, Shakespearean devastation for the screen.

What started as visual methadone for a Dexter addiction has since stolen my every gram of potential sleep. We’re talking five episodes injected at any given sitting. Why watch just one teenth of a season per night?

Perfectly imperfect…..and oh! the hypnosis of narcosis. This is a poetic expedition explaining why the high is worth the risk. And, ultimately, why people bring meth labs to airports.

It’s ART of the highest order. There’s more POV shots than you can open a fridge to (my particular favourite being the delightfully dusty Vac-cam).

I’m broken in, good. Please send season 5 my way. That is all.

Ralph Fiennes owes me one, BIG TIME. He made me reach for the STOP button with Shakespeare!!!! And THAT is almost unforgivable.

I say almost, because he did spoil me with his sublime, passionate bastard of a Heathcliff and his Luciferous Amon Goeth, not to mention his dreamy realisation of the Constant Husband, gardening away until he reached the truth. But CoriolANUS sucked.

This review is one-fourth the size it should be, because I only viewed a quarter of the movie. Which wasn’t moving in the slightest.

It didn’t draw me in – even the POWER of William’s Words couldn’t save this attempt to turn Ancient Rome into the Hurt Locker. And contrary to popular belief, EVERY Brit-flick does NOT have to contain a Redgrave. Be TOLD!

I bid Fiennes to wash his face, keep his teeth clean, and consider some atonement in the form of self-flagellation. That oughta do it.

(As I finish this rantlet, I can hear Ralph – somewhere in the distance with shame etched on his face: Like a dull actor now, I have forgot my part, and I am out, even to a full disgrace.)

The screenplay must have weighed fifty pounds on its own; this film is a fucking cauliflower, and it’s MASSIVE.

I can’t make any new observations; It’s been reviewed to death. All I know is, the movie is epic and immense whilst somehow managing to contain itself within a dirty wet world where two quid is rather a lot of money, where coffee is mistaken for soup, and where dolls need diaper changes. It’s nowt, and it’s all. As nothing happens, so does everything.

And this: it’s real. It has spawned so many bad impressions, sweary drinkathons, and bad pilgrimage misquotes on Crow Crag’s cottage door. When released, I’m guessing that Withnail wasn’t HALF of what it would later become. It’s grown, and continues to do so.

The passion that Robinson evokes is wherein lies his genius. Ahead of its time, WITHNAIL AND I doesn’t know what’s to come, or the legacy it is to leave with its Beckett comparisons and the tidal wave of visitors to Penrith. (This is the muddy juncture where fanatics – in the true sense of the word – can be found hopping into a fucked Mark II Jag and retracing the nothingly-everything journey of Withnail and Marwood).

1) Point the camera and shoot.

For the correct sort of wetness, you should also obtain what looks like unadulterated child’s piss.

In your fucking FACE, Zeffirelli.

To my Darling The Dead Zone.
It’s been 30-odd years and we’re still going strong.  Biannual dalliances have kept us perennial, and with every date you deliver something new, to someone who is:

Not scared – she knows him.

Each time you visit, you promise me a cold time in the old town tonight. And you ALWAYS play that game with me: Castle Rock, Paperback, Dodd’s Scissors…..

With an apparent budget of tens of dollars, I can easily forgive your one flaw: the worst movie death ever (Johnny’s mom), instead relishing one of the finest (her son).

You iconified Walken, and via Sheen, you gave us the Dark Side of Jed Bartlett (You KNEW!!).
Herbert Lom achingly reveals Weizak’s past – a devastating telephone-exposition that his young self just wasn’t meant to be; and so, we learn how second-Sam was born.
Even your melancholy score is in absolute simpatico with my heartbeat, every note reflecting seat-edgedness, teasing out a symphonic range of emotion via a three-part harmony (The Murders, The Spells, and The Prez).
Your clued up crew were in on it, and it shows-from the aural delight of the crunching gazebo snow to the Johnny-lookin’-spooky uplighting.
You’ve been a real sport to me. You just fucking (castle) ROCK and I shall never let you go.
Nevermore…Nevermore…Nevermore.
Let’s send Mediocrity to hell.
Lin.
X

War, huh? What is it good for? A bit of ethnic cleansing here and there, pretty little lab experiments in this petri(fied) dish of a planet? World “leaders” getting their cocks out to compare size? Yeah. It’s good for all those things. War, huh? What is it bad for? Absolutely everythin’.

Today is tomorrow’s yesterday and yesterday’s tomorrow. Stop contemplating about thinking about procrastinating, and do whatever thing your IT may be. Get on it. Today may be your last, or someone else’s.