Nancy Meckler’s take on King Lear sure ain’t perfect. Far from it. But it’s certainly inventive, and whilst it’s perhaps over-confident in parts, it offers an innovative (if inconsistent) glance at the ultimate dysfunctional family.

We see the stage, which all the world is. Only here, it’s covered with sheeting, and is to be gradually revealed throughout the performance. Dotted about the blank canvas are a number of pretenders to the throne that is The Globe: painted vagrants sitting off and having a doss as the real action is happening. Perhaps a nod to current conditions (or, indeed, our shocking attitudes towards them), I’m not convinced this device adds anything positive to the production. Lear is enough of a play on its own without adding extra layers or weaving contemporary subtleties into its fabric.

KING LEAR is getting on a bit, right, and is contemplating abdication or retirement or foot-putting-up or whatever you wanna call it.  Late-life crisis dude has a massive realm, and decides to split it between his kids, Cordelia, Regan, and Goneril. He’s gonna give the biggest slice of Kingdom Pie to whichever daughter has the arse-kissiest response:

….which of you shall we say doth love us most?

GONERIL comes along and kisses said fatherly arse, proclaiming that she’d rather go blind than live without this breathtakingly graceful and honourable man, beyond all manner of so much. He’s just like, SO AWESOME, goddammit, this king of everything. But, so two-faced is she that she declares her love the bringer of speechlessness, despite using wordy insincerity to get her point across (Shakey, mate: I see what you did there).

Her sis, REGAN, is made of the same crappy fabric. She declares her love superior to her sibling’s, and is, ergo, surely the ONLY one who loves him how he deserves to be loved, what with him basically being God ‘n’ all. Lying cow.

But then there’s my girl CORDELIA, who, despite her initial contemplation that she should keep schtum and just get on with loving the crap out of him, confesses:

I love your majesty according to my bond; no more, nor less.

Ouch. Very ouch. I mean – damn if she ain’t sincere, but Daddy, being so far up his own posterior ‘n’ all, simply hasn’t an igloo about true love. He gives her a chance (and then another…and another…) to speak again, because she’s his JOY, his blue-eye. But —damn it— she can’t lie, DAMN her damn honesty. So, Lear banishes her –very dramatically– from his kingdom, which he then divides between that arse-kissing pair.

Kevin R McNally ain’t half bad. Not half bad at all. Despite certain instances in which he and his character are let down by cheap laughs and even cheaper props, there are moments I swore I was looking at Lear himself; the madness worn on his face like a badge of dishonour. Fragile, commanding, and altogether bonkers, we see Mac delivering a right ol’ smorgasbord of demented torment, tainted only by the aforementioned playing for laughs thing. Yes, we get the irony of certain lines. Yes, the phrasing and timing and delivery is all-important, but for goodness’ sake, let’s not forget that this is a Shakespearean tragedy here. I could’ve done with the whole comedy aspect being taken down a notch or twenty; although it could be said that it was the audience themselves who didn’t understand that dementia and/or mental illness just isn’t funny.

[Consider inserting names of the sister-actors here, but move off the subject ever-so-gracefully because not a single one of ‘em floated my proverbial – we don’t wanna go giving scathing reviews, now, do we?]

Lear’s parallel-character, his Tyler Durden, the EARL OF GLOUCESTER, has two kids —Edmund The Bastard (really) who’s a bit of a bastard, really … and Edgar, who is pretty much a stand-up guy. Top bloke. To even up the ILLEGITIMACY 0 LEGITIMACY 1 score, Edmund plots to bump off his legitimately-sheeted brother. Burt Caesar is a strong Gloucester in parts, somewhat amateurish in others, although he was possibly let down by the naffness of metal trolleys and the insufficient eye-gouging that just wasn’t gougey enough [Dude-Wot-Played Edmund: totally forgettable. Soz].

Saskia Reeves – what can I say about Saskia Reeves? That woman was on fire. And I mean FI-YUH. The very definition of ACTOR, the lass was so skilfully versatile and sob-inducingly restrained, that she controlled her gift and kept the audience up in the air with it. It would’ve been pretty easy – and obvious – to play Kent-in-a-Dress. But, thankfully, Reeves didn’t go there —instead opting for the refinements only a true artist can display. 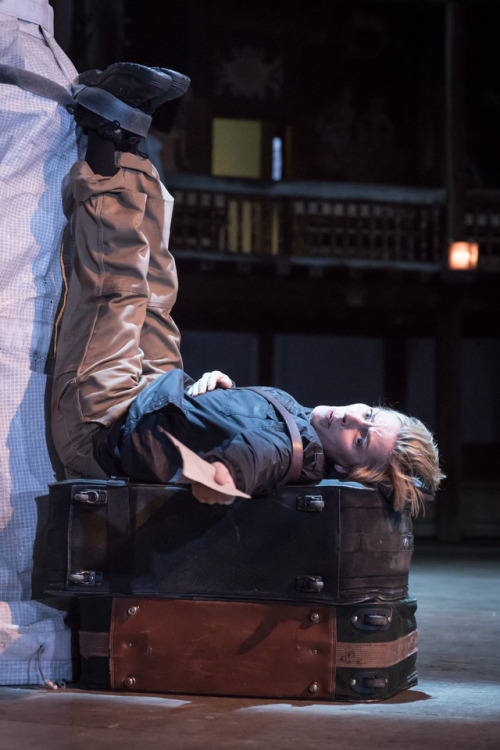 Joshua James is a stand-out Edgar/Poor Tom, giving his very self to the role whether slathering himself with mud or delivering one of the finest lines ever written, as he summarises everything we’ve just witnessed.

Lear is dead. And we know this, thanks to Eddie baby:

The weight of this sad time we must obey;
Speak what we feel, not what we ought to say.

In line with this guidance, I feel that this production, whilst a worthy effort offering some powerful performances, was let down by a dash of over-ambitious imagery and a peppering of Trying Too Hard. That said, seeing Lear come to life on ANY stage —particularly this one— is always a plus, particularly when he is realised by and reanimated through such an accomplished and perhaps under-rated performer as Kevin R McNally. 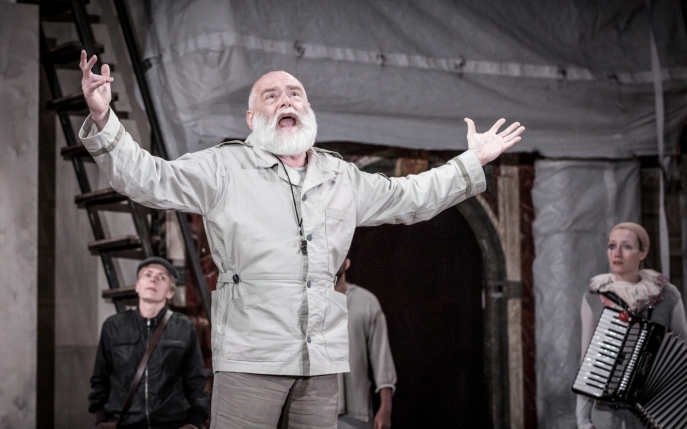