Further to part one (here: https://liberatetutemet.com/category/eds-blogs/), this is … erm … part two of How to Avoid Dem Pesky Mistakes  —identifying some of the most common wordie whoopsies.

Loose and Lose are first up today —so, what’s the dealio? Well, the word on the street is that —gasp!—they mean different things!

Loose: something wot’s not tight, innit—’tis pronounced in such a way that it rhymes with moose and hoose (admit it— you’re singing it now).

Lose: To misplace something (or even someone)—’tis pronounced LOOZE, to rhyme with snooze/shoes/I demand to have some booze.

See?— ’tis a doddle. Of course, there’s also LOOSED, which throws itself rather splendidly into the mix as the past tense of LOOSE, and means … erm … loosed. Not to be confused with LOST, which means lost. Gottit?

“He loosed his grip around her throat” —indicating a deliberate action: second thoughts, perhaps. Remorse, maybe … Bless him.

“He lost his grip” —which might indicate either clumsiness or an inability to retain said grip upon, say, a glass (or reality itself, owing to an exaggerated state of inebriation caused by ill-advised imbibement of lighter fluid).

Speaking of which, a friend of mine once had soooo much of the stuff that upon lighting a cigarette, he ignited his face instead, his eyebrows scattering to the floor in ashy despair. This may or may not be true, but it brings me nicely onto the topic of furry facethings. Because GAWD DAMN IT, people.

Perhaps your creative writing class suggested you employ the furrowing of brows to indicate expression, which is no bad thing, if used sparingly. But, dear LAWD —must EVERY single line of dialogue come with a description of what the character’s face is doing? The same applies to nodding, m’dears.

When you over-egg the prose, it sounds like this to me:

“He raised an eyebrow, browishly. It was the only way he could express his emotions, emotionally. There were other adverbs to be had, adverbially, but he would save those for the next paragraph, in which he would explore the exploratory possibilities of nodding, noddingly. Unsurprisingly, he did, indeed, nod once more, which set his damn eyebrows off again. They looked as though they could do with a wee twitch, arch, or furrow —after all, it had been a while. Right on cue, they did an ugly little jig, like Theresa May at a Tory Party conference.”

I challenge you to search for “brow” in your latest WIP. “Nod,” too. Now, there are no hard and fast browcount rules, of course, but please bear in mind that I recently edited a 60,000 word novel wot came with 1,657 brow references and 2,313 nods of one head or another. Yes, really.

Here’s why it doesn’t work (aside from standing out like the proverbial thumb): come with me, if you will, to the makings of an anecdote.

You witness an event. Perhaps a car crash, or maybe even a pastie of chavs havin’ a scrap. How do you tell the missus/hubby/whoever about your day?

a) So there was this gaggle of chavs, right, knocking proppa shit out of each other down the pub today;

b) Let me tell you, Ethel —what a day I’ve had. Trying to relax at lunchtime over a pint of mild and a bag of squirrels, I happened upon a group of strangers having a bit of a to-do. I took a swig, furrowed my brow, and began to watch the unfolding drama. With an eyebrow raised, a young woman approached a rather unkempt young man, and glared right at him. He furrowed his brow, and nodded. Then a third person joined the fray, Ethel. A third person! His eyebrows were set in surprise, they were. Like a stone clock. Ten-past-ten, right there on his face.

Catchie mah driftie? Keep it REAL, folks! Please get out of the habit of describing every.single.thing your characters’ faces do. Be descriptive, not prescriptive.

On that note, I’m off. Unlike my eyebrows, which are very much on (I’m a Scouser —it’s the law). 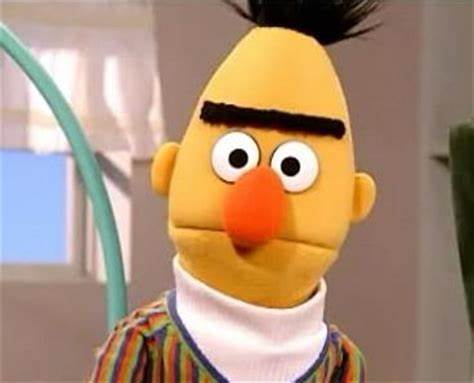 Bert was surprised to find he actually preferred version B.